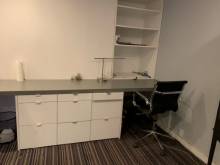 Enjoy all that the city that never sleeps has to offer with New York, NY office space near me!

The most populous and densely populated city in the United States is also one of the most sought-after cities to live, work, and play in. With more than 20 mln residents within its 783,7 square miles, this megacity, by default, is primarily accepted as the world's cultural, financial, and media capital.

So, securing your own New York City office space is just the beginning of your thriving business!

New York, NY has five boroughs – Manhattan, Brooklyn, Queens, the Bronx, and Staten Island. As the premier immigration gateway into the United States, NYC is rich in its diversity and society. Over 800 languages are spoken in New York, NY, and it draws over 66 million tourists annually. With it comes entrepreneurs, educators, movers, and shakers.

Now imagine your New York office space among this hive of activity. Agree; you deserve it!

Renting a New York City office space means reserving your place in the global hub of business and commerce. You will reside next to hundreds of headquartered office spaces for rent in New York, NY – from the United Nations to media conglomerates.

Historically, the banking and finance, world trade, and real estate industries have been the backbone of NYC's great fortune. Today, Silicon Alley in Manhattan, NY, has brought about new initiatives that continue to push the boundaries of world standards. Tech sectors like digital media, software development, game design, biomedical research, venture capital, and other entrepreneurial ecosystems that occupy NYC office space bring in millions and billions of dollars. This tech sector alone employs over 300,000 people!

What are you waiting for? Immerse yourself with NYC office space for rent. Start today by calling an experienced commercial real estate agent to explore New York, NY office space near me: 1-888-518-9168