Are you looking for Cerritos, CA office… Readmore 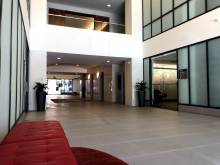 Available now is this modern… Readmore

Are you looking for Cerritos, CA office…

Available now is this modern…

If you’re looking to establish or relocate your business to a centralized location in Southern California, Cerritos, CA commercial real estate is worth checking out! Bordered by Bellflower, CA, Norwalk, CA, Buena Park, CA, and Southwest Anaheim, CA,  Cerritos, CA lies on the border of LA County and Orange County, CA –a very favorable place to be! Some may be surprised to learn that this suburb in LA County was formerly called Dairy Valley because of the prominent dairy farms that once filled the area. Today, Cerritos, CA is truly a forward-thinking city, as it has been since its inception.

Cerritos, CA is definitely a business-friendly environment! It was awarded the Most Business-Friendly City Award for cities with a population under 50,000 residents, by the Los Angeles County Economic Development Corporation in 2010. You can find commercial real estate suitable for light manufacturing, industrial, retail, and professional offices all in the city. Cerritos, CA has over 208,000 square feet of available office space for rent at class A properties like the Cerritos Center Court.

Ideal Business Location for Commercial Space for Rent Near Me Cerritos, CA

Cerritos, CA has been making a name for itself since the early 1970s when it was one of the fastest-growing cities in CA. It was also one of the first cities in LA County to develop large-scale retail zones like the Los Cerritos Center shopping mall and the Cerritos Auto Square –both of which remain some of the largest employers in the city. In addition, Cerritos, CA is also home to the Nation’s first solar-heated city hall complex and is known for a few other impressive developments. The Cerritos Center for Performing Arts draws a large tourist interest as it offers live performances in music, magic, comedy, dance, and drama. It is known that Frank Sinatra had a 4-day performance as its grand opening. What’s more, it’s received four awards for design and has become one of the top-grossing theaters in its category nationally. The $40 billion dollar facility known as the Cerritos Millennium Library is also worth mentioning. It’s the first building in North America to be coated in titanium panels –a trend that would become the new norm with commercial real estate properties. It features elaborate interior design and programs that have earned it a Smithsonian affiliation. The show-stopping 1984 Summer Olympic practice facility at the Cerritos Olympic Swim and Fitness Center provides year-round access to indoor recreational activities, instructional and competitive swimming programs, and a state-of-the-art gym.

With a median annual income of $91,500, it’s no wonder that its residents and workforce have put Cerritos, CA on the radar as #21 Best Places to Retire in CA and #34 Best Suburbs for Young Professionals in CA. Cerritos, CA residents also happen to be the 2nd highest retail spenders in CA behind Beverly Hills, CA. Its centralized location that is directly serviced by 3 major freeways (the SR 91, I-605, and I-5) has made it a desirable place to live and work. This city is also unique in that it owns its own fleet of federally funded public transit vehicles called Cerritos on Wheels. These wifi-enabled buses connect to other regional fleets like the Long Beach Transit, Orange County Transporation Authority, Norwalk Transit, and Los Angeles MTA buses at overlapping stops all over the city.

What are you waiting for? Call today to schedule a tour of some great Cerritos, CA office commercial real esate: 1-888-518-9168